Once again, Baltimore is getting international attention for a crime story, and this time it’s for Serial, the podcast that’s setting records with more than five million downloads.

A question for communicators and reputation managers is this: Will Serial make a lasting impression on Baltimore’s image in a way similar to The Wire? Or will the story overshadow the setting this time?

Created by This American Life and hosted/reported by former Sun reporter Sarah Koenig, the inaugural season chronicles the 1999 murder of Woodlawn High School student Hae Min Lee and the investigation and trial of her former boyfriend, Adnan Syed, now serving a life term in a Cumberland prison. One reason for Serial’s popularity is how real it is — Koenig and team obtained tapes from the trial, as well as detectives’ interviews, so actually hearing Hae’s mother, defense attorney Cristina Gutierrez or Adnan himself in your earbuds makes it chillingly real because it is.

The style reminds me of my newsroom days, sitting next to reporters who comment on the ups and downs of reaching sources and what they really think about how a story is developing. Listeners get to hear that and more through Koenig.

The cult-like following is now commenting on Facebook, Reddit and beyond, and the obsessed are already sharing photos and stories about the Baltimore and Baltimore County sites mentioned in Serial, from Leakin Park where Hae’s body was found to the Woodlawn High School bus lanes, to the Best Buy on Security Boulevard. Even The Crab Crib on Johnycake Road has gained this international attention.

So will Serial’s Baltimore setting stick in listeners’ minds, letting another crime show define the city’s image? Or do we just need to get used to Baltimore being home to interesting (if not tourism friendly) stories — and the home to talented storytellers?

The Absolute Latest in Social (At Least Today) 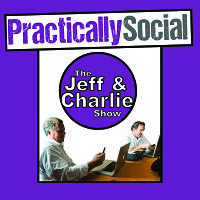 Practically Social Episode 6: “We Head to Baltimore to Talk to Liz at Planit”