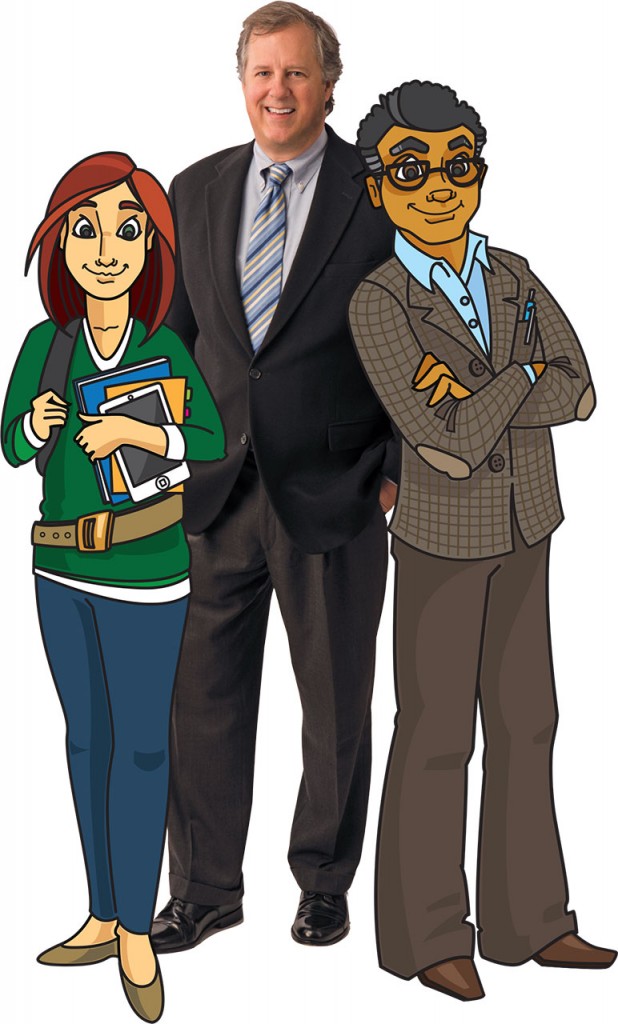 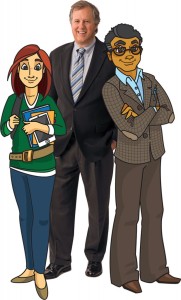 This article appears in the Winter edition of OWU Magazine published by my alma mater, Ohio Wesleyan University. It summarizes a social media campaign I helped to develop for the Council of Independent Colleges in Washington, D.C.

“They make degrees so expensive that people can be buried in debt for life.”

Sound familiar? It’s a common perception (or misperception) of the cost of a liberal arts education today. But when a Twitter user casually sent that thought into the cyber universe back in October, he probably didn’t expect the Twitter account of two cartoon characters to respond.

“Actually, it takes far less time to pay back college debt than it did 25 years ago,” came the reply from Libby and Art, linking to an article backing up the claim. Libby (a bright-eyed liberal arts student) and Art (a college counselor) are the voices of @SmartColleges, a Twitter handle from the Council of Independent Colleges (CIC) that was developed by Jeffrey Davis ’81.

When CIC decided to launch a public awareness campaign on the value of liberal arts and independent education, they turned to Jeff, who is principal at J. Davis Public Relations in Baltimore and Baltimore editor at Capitol Communicator. With more than 30 years of news, public relations, and social media experience, Jeff is an expert at sending the right message to the right people—and that’s just what CIC wanted to do. Their goal was to break through the myths and stereotypes about liberal arts that often pervade the Internet and to start telling a more accurate story about the value of liberal arts.

That’s where Libby and Art come in.

“At first, we had no idea that the campaign would result in Libby and Art. All we knew at the start was the campaign should have a strong social media component,” Jeff explains. After conducting research and holding focus groups with high school students, CIC turned to Twitter as a top communication vehicle.

From there, Libby and Art were born. “By creating the two characters, we were able to give a voice to tweets that you couldn’t really do if it was a logo or an association’s account blasting out messages and not interacting with people,” Jeff says.

Through the personas of Libby and Art, Jeff shares a variety of tweets with @SmartColleges followers and other Twitter users, each intended to provide helpful facts about liberal arts and independent colleges.

“We focus on sharing a mix of tweets and not simply a series of press release headlines or one-way statements,” Jeff points out. “We look for conversations to join, questions to answer, and we’re not afraid to challenge people who are trying to spread myths about liberal arts.”

A few minutes on the @SmartColleges Twitter page reveals a variety of content: retweets from passionate liberal arts students, beautiful photos of independent college campuses, news articles, and engaging dialogue, as Libby and Art chime in to debunk Twitter users’ myths about liberal arts. With around 3,000 followers and 2,500 tweets, the page is full of personality and buzz.

Every day, Jeff and the CIC team sift through web content related to social media, then share and respond to promote positive messages about private, liberal arts institutions. Affordability and access to scholarships, high graduation rates, small class sizes, and the employability of graduates are just a few of the themes that Jeff and CIC highlight.

As characters, Libby and Art bring a lot of life to the story of liberal arts. At times, the characters tweet individually, signing off as Art or Libby after the tweet. More often, the two share an opinion and a voice.

“If we do sign a tweet, Art is typically more serious, sharing facts or studies, while Libby is eager, involved, ready to defend,” Jeff explains. “We try to be ‘real’ by picking up and responding to tweets that actual students and other real-life people and organizations post. We try not to be boring, and we also are careful not to cross the line when challenging someone who bashes liberal arts or tries to spread myths.” Along the way, the characters bring energy, authenticity, and even a little snarkiness to their messages—just what CIC needs to stand out amidst the noise of the Internet.

So far, the campaign’s strategy seems to be working. As Libby and Art reach their one-year anniversary at the beginning of 2015, Jeff says the focus so far has been on building a base of followers and encouraging them to share Libby and Art’s content.

“If CIC can create useful content that all of the followers share (retweet), that single message touting an important point about the value of a liberal arts education can reach a huge audience. It’s the power of amplification,” he explains.

Libby and Art’s most retweeted content has been infographics created by CIC. The pair has also helped build and strengthen relationships between CIC has with individuals and organizations. And they’ve received a good deal of media coverage, helping to further spread the word and draw more followers.

As an Ohio Wesleyan graduate and a parent of college-aged students, Jeff says these messages hit home.

“Being so close to the campaign’s messages reinforced how Ohio Wesleyan delivers on all the benefits of a liberal arts education. For me, the most enduring lessons took place in Slocum Hall, working on The Transcript when it was located on the ground floor, and taking the journalism classes taught by Verne Edwards on the second floor,” Jeff recalls. He has used the lessons from those OWU experiences throughout his career, he says, and he’s thankful for the broad exposure and real-life experiences he received as an undergraduate.

“One of the campaign’s messages is that a liberal arts education prepares you for a career that doesn’t exist yet, and that was true for me,” says Jeff, a journalism major at OWU whose first job was working as a reporter at The Delaware Gazette. “When I was at OWU, we certainly weren’t talking about social media, but the skills we were learning—problem-solving, creativity, clear written and oral expression, and the ability to work in teams—translated perfectly to a form of communication that wouldn’t come along until decades after my graduation.”

Through Libby and Art, Jeff is telling that story every day—helping to open the door for others to have a college experience like his. He’s on the front lines, fighting for what OWU and so many other independent colleges stand for—one myth-busting fact at a time.

Amanda Zechiel-Keiber ’09 is a freelance writer in Columbus, Ohio and Class Notes Editor of OWU Magazine.