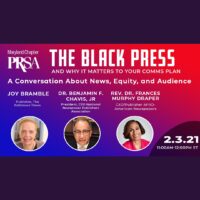 The Black press can get overlooked but it’s a trusted source of information for America’s 50 million African Americans and tells stories and uncovers truths that you won’t find in the mainstream media. PR and advertising professionals should not ignore this powerful voice of the Black community.

“We’re not the relic in the closet,” cautions Dr. Frances “Toni” Draper, CEO/Publisher, AFRO American Newspapers. There’s a stereotype that Black people don’t read and that they only listen to the radio, she told a virtual gathering of PR professionals organized by the Maryland chapter of the Public Relations Society of America.

While a stereotype, it’s not true, and advertisers are missing out if they don’t include the Black press in their media plans, Dr. Draper said.

The Black press has been in existence since 1827 with Freedom’s Journal, America’s first Black-owned and operated newspaper. Founded by Rev. John Wilk and other free black men in New York City, it was published weekly starting with the March 16, 1827 issue.

Agencies are not known for their diversity, especially the higher level executives who approve ad-buy decisions, the panelists said.

Something to look at: the statements of support and social media posts, prominent last spring in connection with the attention on Black Lives Matter. Was it lip service, or did those statements translate into actions such as agency hires and media buys?

Challenges persist on the editorial side as well.

“Black people work in the mainstream media, but they need permission to write the stories they write,” said Dr. Draper, noting that with the Black press, publishers and top-level editors are making those decisions, resulting in stories you won’t see elsewhere. The bonus is that subjects of those stories tend to open up to members of the Black press, resulting in deeper content compared to what a white reporter might uncover.

“We get stories they can’t get because our readers trust us,” Chavis said, noting recent successes in helping to get out the senate runoff vote in Georgia in spite of voter suppression. “We are relevant because we are trusted.”

Joy Bramble, publisher of the Baltimore Times, talked about receiving pitches for free coverage, only to see the same material appearing as paid advertising in The Baltimore Sun or other mainstream media. Publishing is a business and the Black press is a needed institution that deserves support, she said.

The panelists agreed on a call to action for the PR and advertising industry: contact the Black press to discuss your clients’ needs and work together on a program to move the needle so there is true equality and a win-win for all. Become aware of their history and role in the community. Subscribe to and read the newspapers and make them part of your media plans.

Practically Social Episode 37: Opposite the Editorial Page
Scroll to top