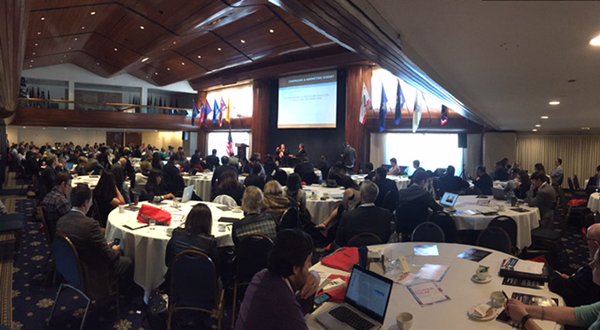 While communicators explore Snapchat and live-streaming video, email remains the killer app and televised moments from the presidential debates are still a major force in today’s campaigns, according to presenters at the recent Campaigns & Marketing Summit I attended at the National Press Club.

“Instead of being the Snapchat election this has become the three-hour televised debate election,” said former pollster and political strategist Mark Penn, speaking at the conference attended by more than 300 communications and political campaign professionals.

The former worldwide CEO of Burson-Marsteller and CEO of Penn Schoen Berland said Florida Sen. Marco Rubio has a good chance of emerging on the Republican side, but the question is “can he survive?” As for what to make of businessman Donald J. Trump, Penn cautioned “we can’t write the history books before history is made.” One advantage for Trump is his “express elevator campaign”: he can ride to his lobby for an instant campaign event, complete with cameras and reporters ready to comply.

Penn said a big change is the independent voter who doesn’t identify with partisanship. It’s the new demographic group to understand and reach: “Never before have we had so many people with such little affiliation with the parties.”

At the luncheon keynote, attendees heard from Shawn DuBravac, chief economist with the newly renamed Consumer Technology Association, who predicted that we’ll look back and say advances in voice recognition are the most impactful recent development in technology.

“We’re already at the point where there are more cellphone subscriptions than people in the U.S., and it’s growing,” he said.

The day was filled with presentations that delivered a mix of traditional marketing communications with the strategists behind politics and campaigns.

Other tweets and comments from the summit:

“Snapchat is the new TV, just look at how Discover is using the platform” – Sherri Anne Green, Director of Marketing, LMO Advertising

“77% of undergraduates are on Snapchat. You need to get on board” – Laura Wilson, Director of Digital Engagement and Social Media, Georgetown University @lauraewilson

On Strategy, Live-streaming, Targeting and Millennials

“Having a data strategy is as important as having the data.” @jasondboles

“One person’s successful marketing is another’s creepy factor (when ads follow you on the Internet).” @Josh_Green

“Your job is convincing voters through compelling stories, but what happens when you actually reach the voters? Don’t ignore the second part, which is to take action.” – Nick Marcelli, COO, Revv

“Millennials want to see immediate impact when they engage with campaigns…for millennials, it’s about the issues, not the organization.” @DCxchange

“Live streaming is a great way to engage. But don’t put your candidate in a difficult, uncomfortable position” – @shannonchatlos

“You need to show your stories; don’t just tell them.” Geoff Livingston

On the killer app, email:

“Email is not sexy but it really works. The inbox is key.” – @NickMarcelli

“If you don’t have a clear call to action, you’re sending an unsubscribe button.” @lpackard

Watch Snapchat and other 2015 Predictions

The Absolute Latest in Social (At Least Today)
0 replies